skip to main | skip to sidebar

Natural Fibre - Good for the Environment

After World War II, the use of synthetic fibres exploded. However, over the years, the increase of oil prices and environmental issues have resulted in a revival of natural fibre use in many industries throughout the world.
The United Nations has declared 2009 to be the International Year of Natural Fibres to raise the profile of vegetable fibres such as cotton, jute, flax, hemp, seeds, leaves, fruit, stalks (such as bamboo); and animal fibres like silk, wool, angora, mohair and alpaca.
Alpacas, usually in herds of less than 50 animals, are the main source of income for an estimated 120,000 families in the highlands of Peru, Bolivia and Chile but there is limited scope to expand alpaca production in the Andes, due to lack of grazing land. Herds in North America and Australasia are expanding by almost 20% a year, and could soon become significant world suppliers.

In the world of alpacas we start with this: 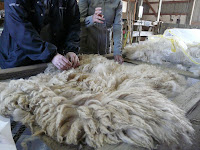 that gets made into beautiful clothes such as these: 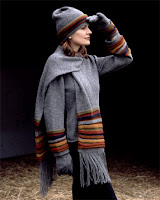 In recent years, interest in alpaca fiber clothing has surged, perhaps partly because alpaca ranching has a reasonably low impact on the environment.

Many alpaca farms in Canada have on-site stores that sell raw fleece (great for felting), yarn (in one of the 22 natural alpaca colours or dyed), patterns and finished products. No two stores are the same and I've made many merchants happy in my travels throughout Ontario.

The farm where Serena lives has a wonderful selection of alpaca fibre products - check them out if you're in the area.